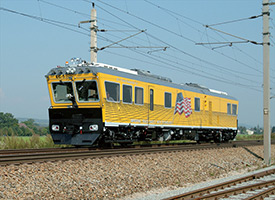 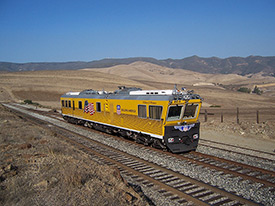 Union Pacific Railroad took delivery of the new EC-5 universal track inspection vehicle in December 2005. Together with the existing EC-4 built by Plasser & Theurer, the new vehicle will test miles of track on Union Pacific equivalent to more than five times around the earth's equator in a year.

Union Pacific Railroad is one of the leading transportation companies in North America. In the western two-thirds of the country Union Pacific Railroad links 23 states and serves the fastest growing U.S. population centers. The railroad offers competitive long-haul routes from all major West Coast and Gulf Coast ports to eastern gateways, transporting a broad spectrum of industrial products including chemicals, automotive, energy and agricultural products.

To ensure cost-efficient maintenance of the huge rail network, Union Pacific has relied for many years on machines built by Plasser & Theurer. The latest addition to the maintenance machine fleet is the EC-5 universal track inspection vehicle supplied in December 2005.

The EC-5 working on Union Pacific is a universal track inspection vehicle of the latest generation. The vehicle has 11 interlinked computer systems that gather data from various types of lasers measuring track surface or level, track gauge, rail profile and rail wear, tunnel dimensions and corrugations. All the measuring systems operate without contact. High-speed cameras are also used to inspect tracks, fastenings and ties and a separate video system monitors the track surroundings. And all that at measuring speeds up to 70 miles per hour.

A crew of three UP staff operates the EC-5. The vehicle performs inspections six days a week. It even has a full-size kitchen so meals can be prepared while on the go.